Critical reasoning is another component that crops up quite frequently on the CAT and XAT, with fleeting appearances on the SNAP and similar exams. Let me first clarify that Critical Reasoning(CR) is NOT Logical Reasoning(LR), especially where the CAT is concerned, but on other exams, such as, the XAT, SNAP, NMAT and IIFT critical reasoning does play an important role in solving LR Questions. This article will focus primarily on the core concepts of CR only. The idea here is to allow our readers an insight into the dynamics involved so that they may combine these CR concepts as and when required to solve LR questions.

Let me begin by talking about logic. Logic, in its classical form, had two modes, inductive and deductive. Now, the primary difference between the two is, where the application of inductive logic may give one a possibly true answer, the application on deductive logic gives, always, a definitely true answer. Can you figure out what type is preferred on competitive examinations? If you’ve answered ‘deductive logic’, I congratulate you, for you are already on the right track!

I will not waste your time and, more importantly, not flaunt my knowledge on the subject, because I do not feel that, in any way, helps you. Instead, let’s familiarize ourselves with the little bit we must learn about deductive logic, the terms that will confront you during examinations and how to respond to those questions.

On Wikipedia, deductive logic is described appropriately and, in my opinion, rather eloquently, as “the process of reasoning from one or more statements (premises) to reach a logically certain conclusion”. Further, it goes on to say that “Deductive reasoning links premises with conclusions. If all premises are true, the terms are clear, and the rules of deductive logic are followed, then the conclusion reached is necessarily true”.

I’m sure you’d agree, therefore, that we must broaden our understanding of a few terms associated with deductive logic, On that note, let’s begin-

1. Logic is a system of reasoning that allows us to arrive at conclusions using available data and critically check the validity of these conclusions.

2. An argument (CR) is a cluster of statements including one or more premises and only one conclusion. In other words, an argument is set of two or more propositions (called premises) placed in such a way that all but one of them (premises) provide support for the remaining one (conclusion)

3.Premise: A premise is a statement in an argument that, effectively provides reason or support for the conclusion. Premises may be either facts or universal statements, Some the indicators of premises in CR are-

* Except when 'because' indicates an actual cause, as in: "Because she was tired, she went to bed early." When ‘because’ is used to give a reason, it is a premise.

**Except when 'since' represents time, as in, “you’ve been calling me since yesterday."

4. Conclusion; Contains the central idea of the argument.

In recent years many cabinetmakers have been winning acclaim as artists. But since furniture must be useful, cabinetmakers must exercise their craft with an eye to the practical utility of their product. For this reason, cabinetmaking is not art.

In recent years many cabinetmakers have been winning acclaim as artists- This is a statement that may be best construed as a generalization that sets the stage for the argument.

since furniture must be useful, cabinetmakers must exercise their craft with an eye to the practical utility of their product- This statement, including the keyword ‘since’ constitutes the premise

, cabinetmaking is not art is obviously the conclusion as it follows the key phrase ‘for this reason’

Which of the following is an assumption that supports drawing the conclusion above from the reason given for that conclusion?

A. Some furniture is made to be placed in museums, where it will not be used by anyone.(There are two reasons to discard this option. Firstly, this one talks about some furniture whereas the premise talks about why cabinetmaking is not an art. Some furniture may or may not include cabinetmaking. Secondly, just because something isn’t used by someone, doesn’t necessarily mean that it can’t be used as intended. For example, a gun may not be used when kept locked in a gun cabinet, but that doesn’t necessarily mean that it can’t be used. And since such an object may still retain its practicality and according to the author anything that has practical usage can’t be art. This option doesn’t hold necessarily true.)
B. Some cabinetmakers are more concerned than others with the practical utility of the products they produce.(Some cabinetmakers  may not be concerned with the practical utility of their product but that doesn’t absolve the other cabinetmakers of practicing , at least according to the author, not art! )
C. Cabinetmakers should be more concerned with the practical utility of their products than they currently are.(This one talks about what cabinetmakers ought to do NOT what they do, so it’s out of scope)
D. An object is not an art object if its maker pays attention to the objects practical utility.(This is the right option because A) It’s a generalization B) If one were to negate this option, the conclusion will no longer hold true. See how that works- If I say- An object is an art object if its maker pays attention to the objects practical utility- then, can I now conclude ‘cabinetmaking is not art’? Obviously NOT! Therefore this is the correct option )
E. Artists are not concerned with the monetary value of their products.(Monetary value is NOT a consideration here since the author ascribes the practical utility of as product as being the criterion that makes something NOT ART)

For those of our readers, engineers specifically, who thrive on graphical representation, here’s how the given argument may be graphically represented- 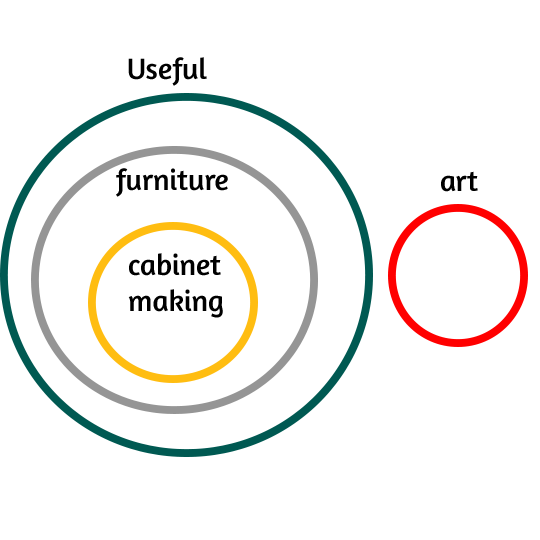 In the next segments we will discuss the common question types and the best way to solve those.