A PHP Error was encountered

Percentage is a mathematical tool that is used to compare values and to quantify the changes (whether increase or decrease) taking place in values of quantities. Even though it is a mathematical operator, it finds its application in almost every field of study. This chapter holds the key to the Arithmetic section and problems on Data Interpretation. Thus, understanding and having a good command over this chapter is a prerequisite if one aspires to score good marks in any aptitude test.

What do we mean by percentage?

Percent means per hundred, i.e. it is a fraction whose denominator or whose base is 100. It can also be viewed as a ratio expressed as a fraction of 100. To understand more clearly, let’s take an example. 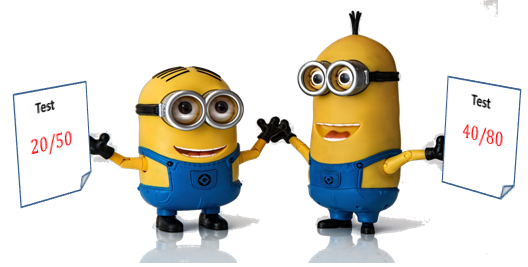 Two students A and B appeared for two different test – T1 and T2. A scored 20 marks out of a total of 50 marks in T1 and B scored 40 out of a total of 80 in T2. Which student has fared better? This is difficult to assess as both these tests have a different total number of marks. Now to make things simpler we bring both these tests to a same base or in other words we extrapolate the marks of students if these tests had a total of 100 marks. So if A scored 20 out of 50, then he would have scored 40 marks out of 100. Similarly B would have scored 50 marks if the total marks were 100. Now it is easy to make a comparison between the students. Definitely B  has fared better.

This is precisely the procedure/process applied in calculating percentages. So percentage simply means the value of a quantity when it is compared to a base value which is 100. Percent is a dimensionless quantity and is usually denoted by ‘%’ symbol.

If it were given that Tom spent 20% of his money on groceries and he took Rs 80 along with him, then how much would he have spent on buying groceries?

Hope the idea is clear now. There are basically two ways of asking a question

Percentage is also used to quantify changes in value. Very often we express the change in value of a quantity with respect to the initial value in terms of percentage. Let’s take an example. The share price of a single share of company XYZ at different times in a particular day is as shown in the table: 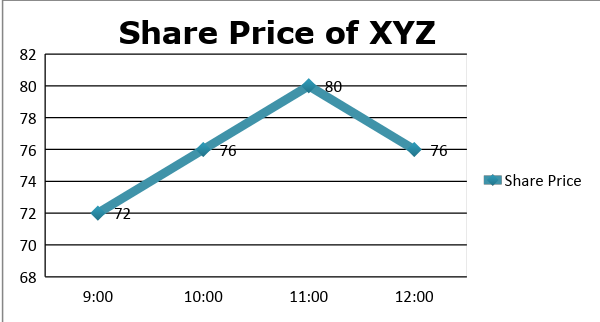 Let us say Raghav had 120 marbles last month and this month they increased by 20%. So, how many marbles does he have now?

This entire procedure can be done in one step with the help of multiplying factor.

This 1.2 is called the multiplying factor

Similarly if the marbles would have decreased by 10%, then

Example 5: Two students appeared in an examination. One scored 9 marks more than the other and his marks were 60% of the total of their marks. Find out the individual marks

In the same question if it were asked by how much percentage is Dick’s marks less than Tom’s marks, then the answer would not have been 25% because here the base would be Tom’s marks as the comparison is made with his marks

Questions on Percentage Change in Price, Expenditure and Consumption:

These type of problems are very frequently witnessed by students in all sort of exams related to aptitude. These problems involve the concept of percentage change which can be very easily applied if we have a clear understanding of the concepts.

There is a basic equation that we need to learn, i.e. 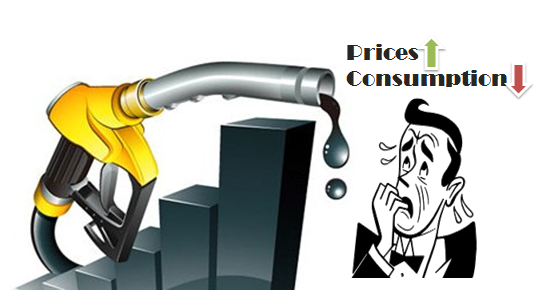 It means if the price of a commodity is increased, then to keep the same expenditure, we need to reduce the consumption.

Similarly if the price goes down then we have to increase the consumption so as to keep the expenditure same.

In case the price goes up and the consumption remains the same, then expenditure will surely increase.

Or if the price goes down and the consumption remains the same, then expenditure will go down.

Let’s solve a few problems on the concept above:

Example 8: If the price of rice increase by 20%, then by how much percentage , the consumption of rice must be reduced by a family so as to keep the same expenditure?

Example 9: The price of kerosene decreased by 20% while the consumption of it increased by 10% in a family. What is the percentage change in the expenditure on kerosene by the family?

The same concept can be applied in all the cases where product of two parameters is equal to the third. For example

Length * Breadth = Area of the rectangle

Example 10: Hanu goes to karate class from his home every day and leaves his home at 5 P.M. reaching the class by 5:30. One day he increased his speed by 20%. At what time will he reach his class that day?

Solution: Here the distance between the karate class and home remains the same. So speed and time are inversely proportional to each other.

Example 11: If the price of an entity is increased by 25%, but the budget increases by only 8%, by how much percent should the consumption be cut down?

Example 12: Ankit goes to a shop with an amount of Rs 300 to buy apples with the entire amount for his mother. But the shopkeeper told him that the prices of apples have been reduced by 40%. Now with the reduced prices, he was able to buy 10 more apples with the same amount. What is the new price per apple?

So, we can say that  a successive increase of 10% and then 20% is equivalent to a direct change of 32%. There is a formula to directly find a single equivalent percentage change 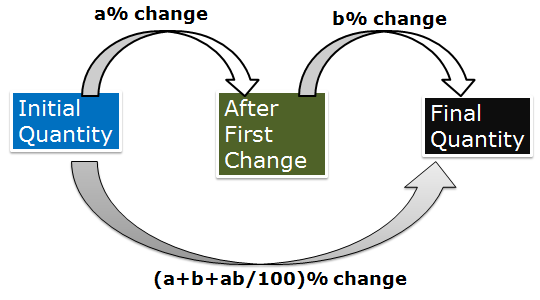 Now if a quantity is first increased by a% and then decreased by b%, then put –b instead of b to get the required percentage change. So, formula in this case would become

Similarly if it is decreased by a% and then increased by b%, then use –a instead of a to get the required result.

If both the times the quantity is decreased, then use –a and –b instead of a and b to get the result. Of course if the final result is negative the n it would mean a decrease.

For example if a quantity is first decreased by 10% and then by 20%, then

So, the quantity has decreased by 28%.

Example 13: The length of a rectangle is increased by 12.5% while its breadth is decreased by 20%. How much is the percentage change in area of the rectangle?

Solution: Here we can use the concept of successive change to find out the equivalent change in area of the rectangle.

So the area of the rectangle reduces by 10%.

Now we will solve with d and c

Example 15: If the radius of a sphere is increased by 20%, by how much does the volume of its hemisphere increase?