This lesson is the starting point of Algebra and deals with some very fundamental properties and theorems related to algebraic functions. So, we’ll study all such theorems and concepts in detail thereby to lay the foundation of algebra.

Polynomial is derived from two words- poly meaning many and nomial means terms, so polynomial can be said to an algebraic expression involving many terms. Here one can witness the variables along with their exponents, their coefficients, mathematical operators like plus and minus and a constant term (not necessary). The polynomial function can be of a single variable or multiple variables. 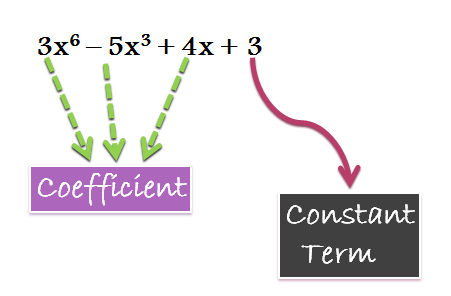 Degree of a Polynomial:

Roots of a Polynomial Equation: 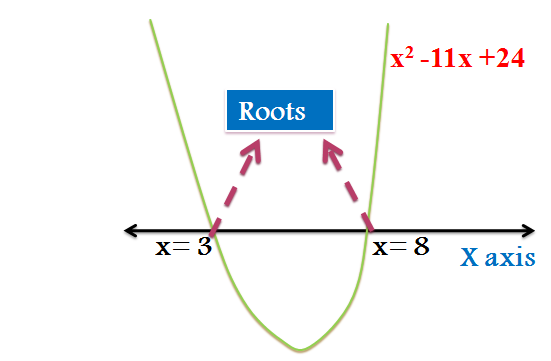 Note:  A polynomial equation of nth degree has n roots.

If a polynomial f(x) is divided by (x-a), then the remainder obtained on such division is f(a).

Here f(x) is the dividend, (x-a) is the divisor, let q(x) be the quotient obtained and remainder be r.

Thus, the remainder obtained is equal to f(a).

It is an extension of Remainder theorem. If the remainder obtained is zero or f(a) is equal to zero, then (x-a) is a factor of f(x).

A polynomial of nth degree can be written as:

Solution: Let the three roots be a/r , a and ar of the given equation.

Solution: Given that one root is 1-i, so by conjugate pairs theorem, 1+i should also be a root. Also, as the degree of the polynomial is 4, there are exactly four roots.

Let the other two roots be α and β

This theorem helps us in estimating the number of positive, negative and conjugate roots of a polynomial equation. Let us understand it with an example

The number of changes in the sign of consecutive terms will give the maximum number of positive roots.

There are 4 changes in the sign, so maximum number of positive roots =4

For maximum number of negative roots, find P(-x) and calculate the number of changes in the sign of the consecutive terms.

Also, we know that

The change in sign gives the maximum number of positive /negative roots. Also we know that the complex roots occur in pair.

Number of positive roots in this case  is either 4, 2 or 0

The total number of roots = 3 as the degree of the polynomial is 3.

So, there is atleast one negative root

Example 8 : Discuss the nature of the roots of the equation: